National Open Air Museum
Palackého 147, 756 61 Rožnov pod Radhoštěm
www.vmp.cz
The Museum documents, preserves, keeps and makes public folk architecture, and interprets a way of living in the country over past 200 years, from the mid-18th century. Opened in Rožnov pod Radhoštěm in relation with the “Wallachian Year 1” first held in July 1925, it is one of the oldest open air museums in Europe. It shows vernacular architecture of the Moravian Wallachia region, both from urban and rural environments; it cares for buildings in Pustevny designed by Dušan Jurkovič. It makes accessible its open air museums Veselý Kopec and Betlém Hlinsko. Architecture and folk culture of Haná (ethnographic region) is shown in Příkazy, whereas culture and bonds of native people with the country in the former Sudetenland and its post-war change can be seen in the open air musem in Zubrnice.

Museum of Moravian Slovakia
Smetanovy sady 179, 686 01 Uherské Hradiště
www.slovackemuzeum.cz
Since the establishment in 1914, the Museum of Moravian Slovakia in Uherské Hradiště has been dedicated to ethnography and archaeology added to by visual arts and history. The scope of research and collecting covers the whole ethnographic area of Slovácko (Moravian Slovakia). As to the field of archaeology and history, the institution pays attention to one important era – Great Moravia, the first stable princedom of West Slavs. The Museum’s branch – the Museum of Folk Distilleries in Vlčnov shows the domestic production of distillates in the Moravian-Slovak borderland. The international cultural trail of St. Cyril and Methodius includes the Great Moravia Empire Monument in Staré Město with a newly built research and presentation center dedicated to these Slavic Missionaries. 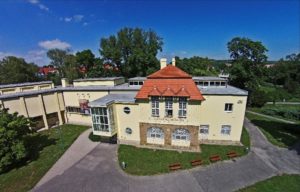 National Institute of Folk Culture
Zámek 672, 696 62 Strážnice
www.nulk.cz, www.lidovakultura.cz
The National Institute of Folk Culture is the central workplace charged with coordination of care for traditional folk culture. It conducts research, processes, stores and releases information on intangible heritage in the Czech Republic. It administers 45 hectares of vegetation and 99 estates in total, seven of which are heritage-listed, e.g. the castle building and neighboring park; the historical brewery building – today the entrance to the Strážnice Museum of Villages of South-East Moravia (Open Air Museum Strážnice). The collections that are unique are those of Moravian folk clothes and musical instruments.